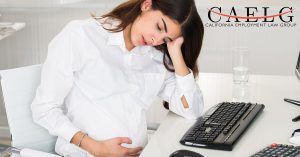 A former human resources employee at Cal Poly has sued the university, alleging that her September termination was discrimination on the basis of her pregnancy, sex and medical condition. As Andrew Sheeler describes in The Tribune article, the university contends the woman was let go because of “documented performance issues.”

Lessing’s complaint states that she started her job as an Administrative Support Coordinator in Cal Poly’s Human Resources Department on April 11, 2016 and discovered she was pregnant five months later.

Though state law forbids termination because of pregnancy or pregnancy disability leave, it does not prevent an employer from terminating based on other causes. However, the complaint states that Blackwell, Cal Poly talent acquisition and recruitment director, praised Lessing as “an exceptional individual” that he was “honored to have” on staff.

As mentioned in The Tribune, Lessing has sued the university for compensatory damages, attorney fees and the costs of the suit. Cal Poly has until April 28 to file a response to the complaint in court or request an extension.

For assistance with your pregnancy discrimination issue, rely on the thorough expertise of the attorneys at the California Employment Legal Group.